The Irish and The Erie 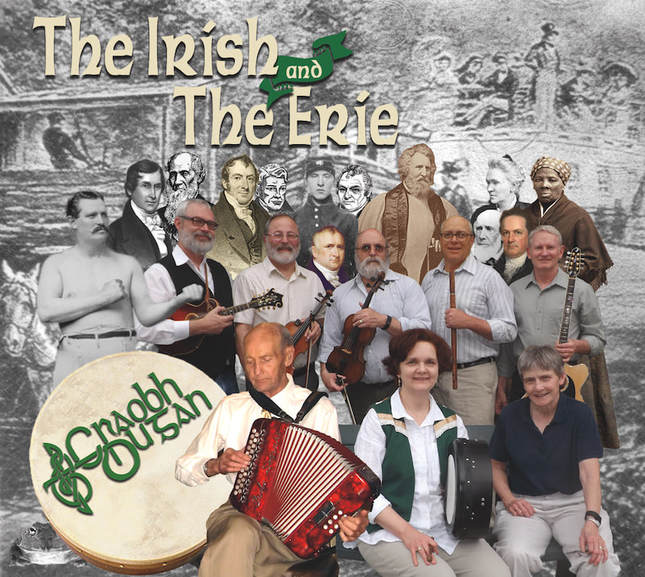 On July 4, 1817, a shovel plunged into the soil in Rome, NY, thereby beginning one of the most significant turning points in American history. On that day, the Erie Canal began and set in motion the new nation's future of transportation, trade, and technology. To celebrate the 200th anniversary of this historic moment, museums, local governments, schools, and civic organizations all over New York are hosting events and creating special projects. The Irish and The Erie live program and CD is Craobh Dugan's contribution.

Having lived his whole life near the Erie Canal, Craobh Dugan's lead fiddler and creative director Mike Hoke was inspired to look into the history of our Irish ancestors' contribution to the digging of "Clinton's Ditch". He knew that thousands of Irish immigrants had spent long hard days digging through the rough wilderness, facing perils like malaria and cholera, and he wanted to make sure the 200th anniversary commemorations didn't leave them out.

After many hours spent at the Jervis Library, Mike wrote the script for The Irish and The Erie live performance filling it with stories and humor. Then he blended in traditional Irish tunes and songs and even added some new lyrics about the Erie Canal. Craobh Dugan mandolin and banjo player Bill Fahy contributed an original Erie Canal song too. Then a group of Craobh Dugan musicians performed the piece for many appreciative audiences in Central New York. It was so well-received we decided to record the musical portion of the performance with the amazing expert help of Jim Inman at his Shack #9 Studio.

But there's more! Here on the website, you can read an abridged version of the story that goes along with the music by clicking the button below.

Who are all those people on the CD cover?

Our CD producer Bill Fahy came up with the idea to incorporate pictures of several people who played a part in Erie Canal history into the CD cover design. When he shared that idea with Sue Romero, Craobh Dugan's webmaster and graphic designer, she loved it and set to work researching characters to join in the story. With the help of Rebecca McLain at the Oneida County History Center and Pamela Vittorio of the Chittenango Landing Canal Boat Museum, our collection of 13 personalities (and one bullfrog) came together.

So pull up a chair and we’ll tell you a few stories about some of the personalities whose lives intertwined with the great waterway known as the Erie Canal. Some are Irish themselves and others played such significant roles in canal life that they most likely ran into a fair share of Irish people somewhere along the canal. 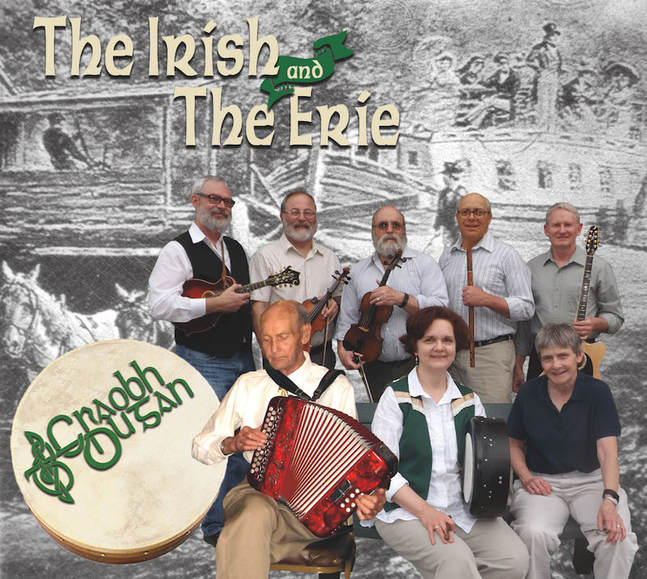 And now some future historic characters, musicians of Craobh Dugan...
Front row left to right
​
Jim O’Looney, accordion. Originally from County Kerry,  Jim played accordion for over 70 years. A resident of the Utica area since the 1950s, he founded Craobh Dugan with Pat and Frank Dugan. His many contributions to Irish music and culture in Central NY are one of the main reasons the music is alive and thrives today. Sadly Jim passed away in June 2018. You can read more about his well-lived life here. He's the reason we changed our name to Craobh Dugan-O'Looney.

Sue Romero, bodhrán and vocals. From Sherrill, Sue has played bodhrán since 2012 and is also our webmaster, newsletter writer, and CD cover designer.

Back row left to right

Bill Fahy, mandolin, banjo and vocals. Bill is from Rome, and has been playing, performing, and teaching American and Irish traditional music in Central NY for over 20 years. He’s been an active performing musician with Craobh Dugan for over 10.

Ed Campbell, fiddle, guitar, and vocals. Ed is from Utica and has been playing Irish and bluegrass fiddle and guitar since 2004.

Mike Hoke, fiddle and vocals. A self-taught fiddler since 1977, Mike was inducted into the Northeast Regional CCE Hall of Fame in 2007. The Irish and The Erie program was Mike’s idea. He wrote the script, chose the tunes, and keeps us all on track.

Mike Carroll, flute, whistle, concertina, and vocals. From Little Falls, Mike is a proud member of the Irish diaspora. His first Irish flute was found running down the street under a dog's arm.

Skip Mansur, banjo, bouzouki, and vocals. Skip now lives in New Hartford but is originally from Washington State and has been playing Irish stringed instruments for over 15 years.
Many thanks to these generous supporters.