The Irish and the Erie Story
by Mike Hoke 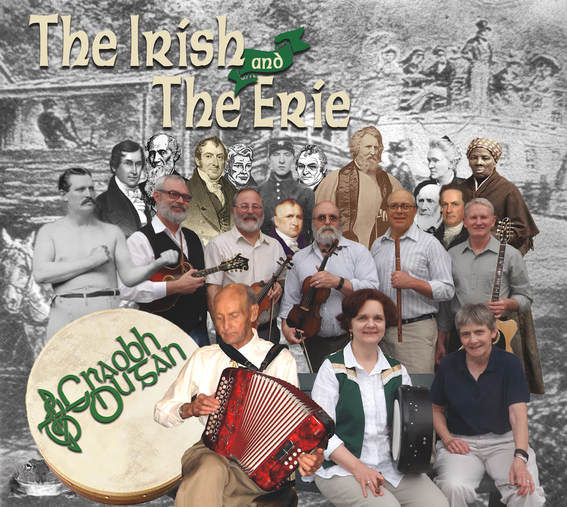 Our live show begins with a set of tunes starting with mid-18th century reels the Rakes of Mallow and The Gal I left Behind Me. A brief bit of introduction is given shedding light on the needs and potential of the canal and the visionaries and proponents of the canal such as Dewitt Clinton and James Geddes.

The magnitude of digging the canal without the heavy equipment we see in modern day construction projects required labor beyond what was available from local labor pool. Canvass White of Whitestown, NY, travelled to England and studied the construction methods and materials of their canals. In his travels he came across JJ McShane a former prizefighter and canal contractor from Tipperary, Ireland, who in turn recruited native Irish and Irish immigrants already in America.

​Leaving one’s country  to cross a vast ocean in the days when the most expedient mode of travel  was the sailing ship was indeed a daunting prospect. The families that were left behind in Ireland would most likely never see their departing loved ones again. The ships that sailed out of various ports were often referred to as “coffin ships” with good reason. Letters were often sent back to Ireland with the terrible news that loved ones were lost on the voyage across the Atlantic. Worse yet, loved ones may never had been heard from again. From this was born the American Wake, a send-off marking the departure of loved ones with music, song, and dance.

The Green Fields of Amerikay is a song that poignantly expresses both the hope and despair felt by the immigrants and their families as their loved ones departed. This is followed by sets of jigs and reels in the style that might have been played at the American wake.

Life On The Canal

Of course not all the Irish were recruited directly from Ireland. Many had come from New York, Boston, and Philadelphia where there was little opportunity for the Irish to advance their fortunes. The allure of adventure, steady employment and wages as much as 50 cents a day versus 10 cents a day, and a steady supply of whiskey rations served as enticements to toil 12-14 hours a day. Whiskey Me Boys or The Humors of Whiskey is an amusing song celebrating the Irish love for a bit of the cratur’.

The Irish contributed many other songs, words written to familiar Irish tunes and airs. Some songs  reflected on the labor and toil aspects of the canal worker's life while others, such as Paddy on the Canal, seemingly spoke of the  Irishman’s thankfulness for being a part of this grand undertaking.

Living conditions were as poor as the working conditions, and as work progressed along the canal, the Irish would eventually move from the camps and shanty towns to the villages and towns along the way. The Irish were not always welcome. Their proclivity for drinking,  rival-county gang fights, strange language, accents, and rumored shenanigans put off the local populace. They became known as the Wild Irish. Here we play three fast paced reels that reflect that feeling.

The Irish brought with them their beliefs and tales of banshees, female spirits that foreshadowed the death of a loved one, and fairies, the darker side of the mischievous but benign leprechaun. A  seanachie or storyteller would spin ghost stories for the new drivers or hoggees, youngsters new to the canal life. A convincing delivery and help from his fellow Irishmen would soon have these neophytes terrorized and running for their shanties from the “apparitions” seen just beyond the fires. The tune King of the Fairies would have been a great backdrop for one of these campfire ghost stories.

The hoggee was the lowest man in the canal pecking order. These were often boys as young as fourteen years of age whose job was to lead mules along the towpath in ten to twelve hour shifts, day and night, in all types of weather. When not accommodated on the boats they would often sleep in the stables with the mules and horses. They were poorly treated by their boat crews and townspeople alike. Bill Fahy pens and sings a song, Walking to Buffalo,  that expresses the plight of the poor hoggee.

The Erie Canal inspired many works of historical fiction. Most notably are the works of Walter D. Edmonds, Rome Haul and Erie Water. The events portrayed in Erie Water take place in the time frame of the start of the Erie with references to the politics involved and speaking to the logic of starting the dig in Rome. It is the story of a young man named Jerry Fowler who found his way west from Connecticut to Albany and Utica where he lucks into a job in helping to build the Erie’s locks.

Within this work is an anecdote called the Wild Irish. Edmonds spins a story of the Irish that had recently come on to aid in the digging through the Montezuma swamp. This tale is a take on the Irish sense of humor wherein the Irish laborers prank the camp cook and are caught in the act with the incident dismissed as a harmless joke.

Growth From The Erie Canal

The impact of the Erie Canal on the growth of New York State cannot be overstated. Prior to its construction, Philadelphia was considered the economic and trade hub of the new nation; after its construction New York City quickly rose to prominence. Within 15 years of the Canal's opening, New York was the busiest port in America, moving tonnages greater than Boston, Baltimore and New Orleans combined.
The Irish assimilated well into the fabric of the boomtowns along the canal. They overcame the prejudices held against them and rose into prominence in many walks of life ranging from politics to industry to arts and education.

This sudden growth would naturally give rise to certain folk heroes and legends up and down the Erie’s waters. Arising out of the eastern terminus of the canal in its latter days was Paddy Ryan of bare-knuckles boxing fame. Here we give you Paddy Ryan’s Dream, The Flogging Reel, and Mulqueens Reel.

As most of you realize, the traditional music and dances of Ireland had a significant impact and influence on the development of traditional American music and dance. The set dances of the Irish with four couples in a square are the forerunners of the American square dance and the Virginia reel line dance is the same dance as the Irish Haymakers Jig. The songs and ballads of the Irish and Scots-Irish made their way across the Atlantic through the Canadian Maritime, New England, New York, and into the Appalachian ballad tradition. One such song, Sally Gardens in Ireland transformed from a love song to a murder ballad called Down By the Willow Garden; not really a stretch once you realize that the willow tree is called a sally tree in Ireland.

​Edwin “Ned” Christy appeared on the scene as a minstrel performing in Buffalo’s newly built taverns and saloons. He went on to form the Christy’s Minstrels employing an Irish fiddler named Richard Hooley. The Christy’s went on to appear in New York City and across the South. They specialized in the music of Stephen Foster and popularized “blackface” performances. The familiar Buffalo Gals was the type of song typically performed.

The Irish language had its influence as well, with familiar English words and phrases with Irish roots. Words that you have heard in this presentation: shanty from the Irish sean ti meaning old house or banshee from the Irish bean si meaning woman fairy or spirit. Hooligans, which were likely abundant along the canal, were derived from a London Irish family, O’Houlihan, known for their rowdy ways. Galore, as in plentiful, comes from go leor meaning until plenty. The method of protest called boycotting was named after the Irish ostracized, 19th century British land agent Charles Boycott. Finally, the familiar phrase “so long” meaning “good-bye” had its Irish roots as slan – also meaning farewell or goodbye.